The ultimate aim is to produce cheap, high-quality biofuel. Oils extracted from algae consist of triglycerides, whereby three fatty acid chains are linked to a glycerol backbone. This long molecule does not burn well in an engine, so it must be broken up into its constituent fatty acids and glycerol. The chemical reaction is called transesterification or alcoholysis and it requires methanol. Three moles of methanol are required for each mole of triglyceride. This produces one mole of glycerol and three moles of methyl esters. Since it is an equilibrium reaction, methanol is provided in excess, a catalyst is used and heat drives the reaction towards producing methyl esters. Yields of methyl esters exceed 98% by weight. Possible catalysts include acids, alkalis and lipases. Alkali catalyzed transesterification is carried out at 60°C, only 5°C below its boiling point at atmospheric pressure. Methanol and oil separate into different phases. 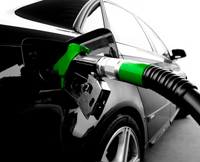